Across the Siren's Lament universe, there is a special type of lettering that can be seen on certain characters or in certain situations that trigger it to appear. Although it is currently unknown what they mean, the parallels between Siren's Lament and its roots in Greek mythology suggest that these symbols are most likely based on an actual language and represent something significant.

Depending on who has it or if it's being activated, the appearance of each marking can vary. Normally, in the case of Aleah's and Crim's markings, they are black. Upon activation, they will glow and may turn either a light or dark blue color. Once the activation is complete, they will return to appearing black and won't fade away.

On the other hand, Lyra and Ian's markings seem to be different. Hers glow yellow and disappear merely seconds after activation whereas his glow blue and also disappear shortly after being activated. So far, there are only two instances of Lyra's markings appearing throughout the duration of Siren's Lament: one when she was born and one when she kissed Shon to become siren again. In contrast, Ian's markings have only been shown in the instance right after Aleah gave them to him. 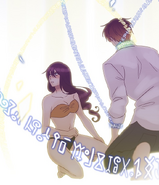 Add a photo to this gallery
Retrieved from "https://sirens-lament.fandom.com/wiki/Special_Markings?oldid=3569"
Community content is available under CC-BY-SA unless otherwise noted.